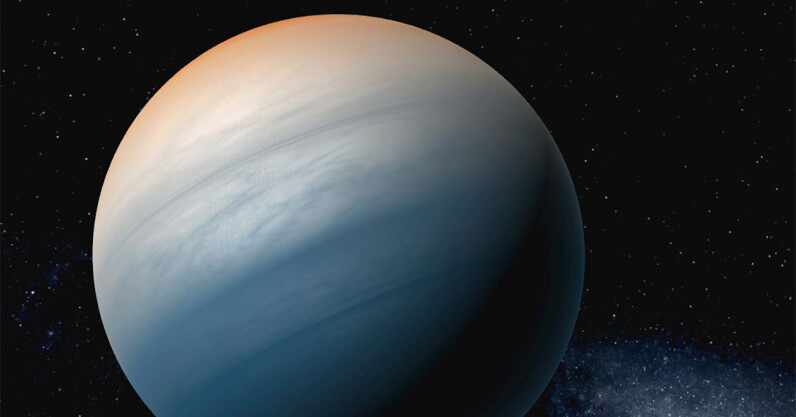 The discovery of life on another world would be a monumental moment in the history of human civilization. The most likely way we will, one day, find alien life will be discovering chemical markers of life in the atmosphere of planets orbiting distant stars.

One of these markers is oxygen, which currently makes up a little over 20 percent of the atmosphere of our own world. However, our own world held onto relatively little oxygen until 2.4 billion years ago, when oxygen-producing cyanobacteria filled the atmosphere with the gas, leading to the first widespread extinction — the Great Oxidation event. Many lifeforms on Earth today, including human beings, are now dependent on this life-giving gas.

“Oxygen is a promising exoplanet biosignature due to the evolutionary advantage conferred by harnessing starlight for photosynthesis, and the apparent low likelihood of maintaining oxygen‐rich atmospheres without life,” researchers explained in an article published in the journal AGU Advances.

There are three scenarios through which we might discover life. The first of these, and the least likely, is the arrival on our planet of members of an intelligent civilization in spacecraft. The second means of finding life would be the detection of an intelligent signal from another world, most likely through radio waves. The most-likely scenario would be the discovery of gases, like large quantities of oxygen, methane, or phosphine, in the atmosphere of an alien world.

The James Webb Space Telescope should soon become the latest planet hunter in the search for exoplanets — some of which might be home to life. We talk with Scott Lambros, NASA’s instrument systems manager on this revolutionary observatory in space.

A new study from researchers at UC Santa Cruz highlights the need for an array of next-generation telescopes capable of searching exoplanets for multiple, independent, signs of life.

“This is useful because it shows there are ways to get oxygen in the atmosphere without life, but there are other observations you can make to help distinguish these false positives from the real deal. For each scenario, we try to say what your telescope would need to be able to do to distinguish this from biological oxygen,” Joshua Krissansen-Totton, a Sagan Fellow in the Department of Astronomy and Astrophysics at UC Santa Cruz, explains.

Researchers hope that in the next 15 years or so, one or more telescopes in space will be capable of directly imaging exoplanets orbiting other stars, and studying the chemical makeup of their atmospheres. Such study could provide multiple means to detect life on other worlds, providing additional evidence for the discovery.

“There has a been a lot of discussion about whether detection of oxygen is ‘enough’ of a sign of life. This work really argues for needing to know the context of your detection. What other molecules are found in addition to oxygen, or not found, and what does that tell you about the planet’s evolution?” Jonathan Fortney, professor of astronomy and astrophysics at UCSC stated.

A series of simulations of theoretical exoplanets showed how exoplanets with oxygen could develop in the absence of life. The chemical makeup of these virtual worlds varied greatly depending on the presence of volatiles — those chemicals that are easily driven off worlds by heat and pressure from a nearby star.

“If you run the model for Earth, with what we think was the initial inventory of volatiles, you reliably get the same outcome every time — without life you don’t get oxygen in the atmosphere. But we also found multiple scenarios where you can get oxygen without life,” Krissansen-Totton said.

Oxygen can build up in planetary atmospheres without life by chemical processes. For instance, water in the upper atmosphere of an exoplanet could interact with ultraviolet light from its sun, splitting the water into hydrogen and oxygen. Hydrogen would quickly escape into space, leaving oxygen behind.

Turning Up the Heat

Other processes, both chemical and geological, could convert these molecules into other products, reducing quantities of the gas on exoplanets with oxygen.

However, simulations showed Earth-like planets containing more water than our world will develop oceans far more vast than our own. The enormous pressures of these oceans would shut down geological processes, preventing oxygen from being absorbed into the planet, increasing levels of oxygen in the atmosphere.

Exploring extreme exoplanets with Dr. Lauren Weiss from the University of Hawaii.

Oh yeah, I need steam… Feel the steam all around me
Ah you’re turning up the heat… When I start to dream aloud
See you move your hands and feet… Won’t you step into this cloud of steam” — “Steam” Peter Gabriel

The opposite case — exoplanets are lacking in water — can result in conditions where a surface of molten magma quickly freezes, leaving vast amounts of water in the air, in the form of a “steam atmosphere.” Once this water vapor meets with ultraviolet light, and hydrogen escapes to space, atmospheric oxygen would be left behind.

“On Earth, once water condensed on the surface, escape rates were low. But if you retain a steam atmosphere after the molten surface has solidified, there’s a window of about a million years when oxygen can build up because there are high water concentrations in the upper atmosphere and no molten surface to consume the oxygen produced by hydrogen escape,” Krissansen-Totton said.

A third scenario examined planets containing more carbon dioxide than Earth, leading to a runaway greenhouse effect. Temperatures on these worlds would remain too high for water to ever condense out of the atmosphere, driving up oxygen levels on worlds too hot to sustain life.

Examining geological and chemical processes on exoplanets shows how alien worlds could hold on to large quantities of oxygen without life. And, how a new generation of telescopes could discover life on distant exoplanets with oxygen.

This article was originally published on The Cosmic Companion by James Maynard, founder and publisher of The Cosmic Companion. He is a New England native turned desert rat in Tucson, where he lives with his lovely wife, Nicole, and Max the Cat. You can read this original piece here.